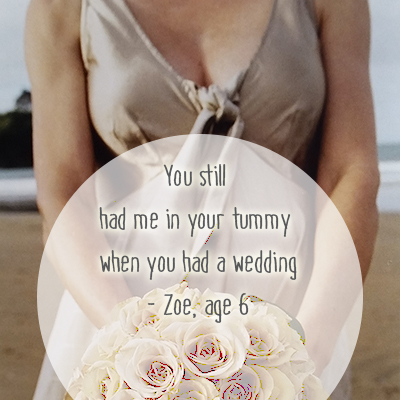 I don’t usually write posts based on writing prompts – I just write when I feel the inspiration (bad blogger). But today I saw a prompt that was one word – handwritten.

Co-incidentally, after a discussion with friends about wedding dresses, I had been thinking about something Zoe wrote in a card to me. It was around the time of the royal wedding and all the little girls at her school were obsessed with weddings, so I showed Zoe the photos of my wedding to her Dad. Disappointingly for Zoe I had neither a train on my dress, nor a veil on my head. However the photo that fascinated her was the one at the top of this post, because it was all about her, a 32 week post conception Zoe in mummy’s tummy, in a wedding dress, inspiring her to draw me a picture and write me a card with these words in it.

So when I saw the writing prompt, I went looking for the card and some of her other handwriting, which I am sharing here just because I am still one proud mama. 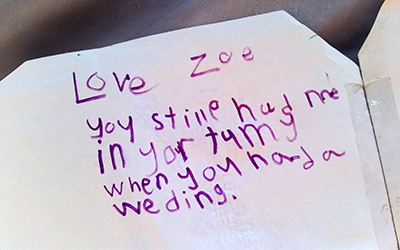 She wrote a similarly beautiful sentiment to her dad. “I love you daddy, you will shine one day, it is so good to have you in my life.” He carries this around in his wallet and also has it tattooed on his chest now.

She was such a wise wee soul, it makes me wonder – did she know she wouldn’t be here long and that we would need these written reminders from her?

Here’s a letter she wrote thanking the zookeepers for letting her feed Burma the elephant and for a book and a toy elephant they gave her. It was written after the final time she was released from hospital when the palliative care team arranged the zoo visit for us. You can see how much her handwriting had improved, her brain learning the whole time, even as the cancer was growing back inside her.

This was written not long afterwards. I’m calling it the Princess Manifesto. The little notebook was also a gift from the palliative care team. The first thing Zoe did was open it up and write “A princess should always be responsible.” This is such an insight into the mind and heart of my girl. It’s nice to be a princess, but it comes with responsibilities to be good and kind. I get the feeling this was the beginning of a long list of thoughts from Zoe on being a princess, but she was too ill to complete it. She had recently told us she was in fact a secret princess. 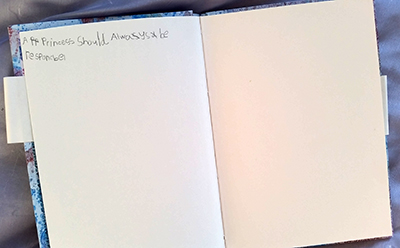 This last thing I’m sharing tells me Zoe loves me because I’m kind to her, but is also a picture she drew. In it she is riding her scooter and I am riding the bike I’d talked about buying but hadn’t, an old fashioned bike with a basket, and we are off on adventure. I never bought that bike while Zoe was alive, but I wish I had. I’ve bought it since and been on a few adventures on my own, feeling like I have a little angel on my shoulder. It’s a reminder to me, and maybe to you too, to remember everyday kindness to those we love and not to wait until the time is right to have adventures.

Also, if you are getting married, you might want to consider your future daughter’s opinion and wear a veil and a dress with a train 🙂

7 thoughts on “The Princess Manifesto and other Zoe-isms”