Can one shaggy fickle moggy show you where you belong?

We didn’t adopt Charlie Cat, he adopted us, soon after we moved to our new house in 2008, the year before Zoe’s cancer diagnosis. We’d moved from a townhouse in the inner city to a single level house with a safe little garden Zoe could play in. No more lugging washing up two flights of stairs along with a strong willed toddler, or driving to where she could walk on the grass.  It was a house that matched my dream of how family life should be, in a neighbourhood of other families, close to the zoo, playgrounds and the beach. There was even a walking school bus to the local primary school and a feijoa tree in the garden.

The week we moved here, I walked with then 2 year old Zoe to the supermarket around the corner. She stopped at virtually every house along the way. “Look, a house, a fence. Look another house, another fence.” With the right house, I felt sure we would become that perfect family, give Zoe a quintessential Kiwi childhood and that our marriage problems would become a distant memory. The addition of a household pet seemed like the icing on the cake. It felt like a sign that he had chosen us.

Charlie showed up for the first time when we were getting ready to leave for Zoe’s swimming lesson. She had a sudden and epic “terrible twos” meltdown about not wanting “the brown kitten eating the door.” (her dad remembers this as “there’s a tiger trying to eat me!”) We assured her there was no brown kitten and looked at each other with raised eyebrows, but when I went back to retrieve something essential – an inevitable part of leaving the house with a two year old – there he was, a big brown tabby with no tail strolling out of her bedroom and rubbing his face on the doorframe. Yes, we were his.

This photo was taken the following weekend

He didn’t have a name in the beginning and he looked well, fed, so I didn’t feed him – I was sure he belonged to some nice old lady who was missing him. But he faithfully turned up every evening for cuddles and settled in for the night, hanging out in various sunny spots all day in the weekends. So eventually he became Charlie Cat and received a food bowl, a flea treatment regime and all his shots at the vet.

It turned out that Charlie was quite the character in our neighbourhood. He was a regular visitor to the fish & chip shop and the gas station, where he would wait for someone to activate the automatic doors so he could peruse the pet food shelf – packets had to be moved out of his reach. He was often to be seen soliciting affection from a captive audience at the bus stop. One boy told us Charlie had also adopted them – until they got a dog – and a woman at the gas station told me he used to spend some evenings at her house too. Another woman was pleased to see him following me down the street one day, as she had worried about him being absent from the bus stop for a few days.

The thin veneer of my dream life fell apart a few months later. Zoe was diagnosed with cancer, my troubled marriage finally collapsed and my parents moved here to take care of Zoe during the day so that I could work to keep our lovely house in our lovely neighbourhood. I took leave from work only for Zoe’s “long chemo days” every chemo cyle, half days for her six solid weeks of radiation treatment and her inpatient stays. It was nine months of exhaustion, barely concealed terror, vomit, tube feeds, surgeries, and scans. It was also nine months of hope, love, tenderness and delight in my amazing daughter.

Charlie Cat was not getting his usual quota of attention, but each night he negotiated the tube that connected the Mic-Key button in Zoe’s tummy to the pump and liquid feed she needed to survive, settling himself between us in the bed or on the pillow above her head.

At the end of Zoe’s treatment, her scans were clear, and we cautiously began to live our new normal. My parents returned to their home a couple of hours away and Zoe resumed daycare before moving on to school.

Charlie still had his wandering ways and after having to pick him up twice when he wandered a bit too far, I had him microchipped. He stayed with us until early in 2012, when he began coming home less and less, until one day, he stopped coming at all.

I looked for him on lost and found pet wesbites, but as his microchip hadn’t been scanned anywhere, we thought he must have adopted another family or met a grim fate. He certainly wasn’t in any of his usual haunts.

Shortly afterwards, Zoe’s cancer relapsed and we had just a few short weeks left with her. A superstitious thought crossed my mind more than once. That Charlie knew the cancer was back before anybody, and that was why he had left us.

Without Zoe and without Charlie it was a very quiet house. Over the next two years I hosted the occasional foreign student for company while they studied English, and a friend’s teenage daughter boarded with me for a while.

I thought rather a lot about moving house. With no family, what was the point of living in a three bedroom, two bathroom family home? Wouldn’t I be better off in an apartment? I contemplated it casually and checked out apartment listings, but never followed through. Memories were keeping me here, and besides it all seemed too hard.

Then in October, just over two years since Zoe died, I was staying at my mother’s house when I saw two missed calls and some text messages on my phone. I checked the message from the friend I recognised first. It went something like “A vet in Pukekohe has been trying to get hold of you, they have Charlie.”

It seemed on the scale of a minor miracle. I was shocked and delighted. A call to the vet revealed he had been brought in by two girls after being hit by a car, but what he was doing 50km from home we didn’t know. Our best guess was that the next family he adopted in our neighbourhood had decided to move there.

After authorising an x-ray (no broken bones, but bruising and fluid around his lungs, concussion and a broken canine), I arranged to pick him up the next day.

Before picking him up, I thought “if he has a family there, I should let him stay with them”. I started the process of trying to find them.

Then I picked him up. Released from his cardboard box, the first thing Charlie did was wobble unsteadily down to Zoe’s room. I put one of her blankets on the floor for him, but he continued eyeing her bed and eventually attempted to jump onto it. After helping him up, we napped there together until I moved him to my bed for the night. The next day the first thing he did was go to sit in her doorway, as if guarding it or waiting for her.

Eventually he seemed to realise Zoe wasn’t coming back.  But he seemed to have a different purpose in life now.

I have a little shadow, who follows me around until I sit down so that he can join me for a cuddle (kneading me like the 6kg kitten he thinks he is). A warm lump that appears in my bed in the middle of the night. He greets me at the door when I came home from work and once silent evenings are now punctuated with one sided conversations as I chat to him in what I will admit is a little akin to baby talk.

And there’s something else. I feel my heart unfurling just a little more with every purr, with every heartfelt meow (“but I just fed you”). Even if the drifts of cat hair drive me a little nuts, I can’t help feeling that Charlie has found his way home (or been guided by an angel) because it’s where he’s meant to be, it’s where he belongs. So for the first time in a while, I feel like I’ve found my way home, it’s where I belong too, in a house made a home by precious memories, with a little creature who helped to make some of them.

Postscript: When my next student boarder arrived, I became persona non grata as Charlie became her little shadow. Oh well, I guess he hasn’t changed that much! 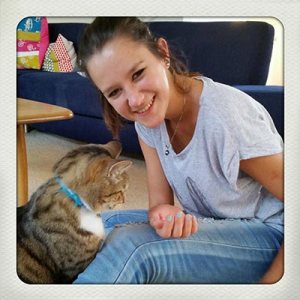 This post has also been published here on nzherald.co.nz

24 thoughts on “The return of Charlie Cat (or on belonging)”