Bereaved parents are a kind of reluctant tribe, the one that no-one wanted to join, and some of us have chosen to mark ourselves as such.
The reasons we do it vary and each mark has a different meaning for those who choose it, but many of our motivations and the symbols we use are similar.

I felt after my daughter Zoe’s cancer diagnosis at age three as if I had become become both transparent and luminescent, as if my interior life was so visible that my story could be read on the surface of my skin. I felt that when we left the house strangers would know our story at a glance, that we were visibly marked by cancer. Of course Zoe was visibly marked, though she seemed not too worried by her battle scars (she called the scar from her mic-key button her “other belly button”).

I felt the same after Zoe’s death at age six, that people would know I was a bereaved mother from the grief, pain, love and despair written on my skin. That the wound of having my child ripped from my life must have left a scar. And that felt right, that I should in fact be physically marked from surviving this.

I got my tattoo the day before the first anniversary of Zoe’s death, and now I feel my body matches more closely who I am on the inside, the fact of Zoe’s existence and my identity as her mother forever on me to be seen.

Having thought so much about my own tattoo and knowing many other bereaved parents had them, I asked them to share their stories with me. They are all different, but all have an element of wanting to permanently mark their child’s existence on their bodies.

Zoe’s Dad started his tattoo as soon as we found out Zoe’s cancer had relapsed and was terminal, some precious words she had written in a letter to him forever tattooed on his chest.

Keri, Chace’s mum, says  “I think the tattoo for me is to do with permanence – something that  I know will always visually be on me.  I like that it will grow old with me, fade, get wrinkly because my grief will follow me too.”

Harri, Lowri’s mum says “I deliberately got it done on my ankle so that it was visible to the whole world”

“After Phoebe died I became obsessed with writing her name,” says Susie “ I carried around a water proof felt tip pen and wrote her name on anything I could find walls, posts, fences, signs. I kept it small but I wrote it where ever I could get away with it. I wanted the world to know she was here, she is missed  and she is loved.”

What we choose to mark ourselves with and where is deeply personal. For some, such as Susie, it is as simple as her daughter’s name. The placement on her shoulder is because that’s where she feels Phoebe, whispering in her ear. Since getting the tattoo, she no longer feels the need to write Phoebe’s name everywhere. Susie also has another tattoo, to mark the loss of two babies.

For me In addition to marking my grief, the words that make up my tattoo are also a mark of hope. I came across the quote, from an ee cummmings poem a few months after Zoe’s death, and the words kept repeating themselves in my head. Every mother carries her children in her heart. With my child no longer in the world with me, I needed a permanent physical reminder that wherever I go, she goes, whatever I do, she does. The thought of having these words permanently above my heart came to feel perfectly right. 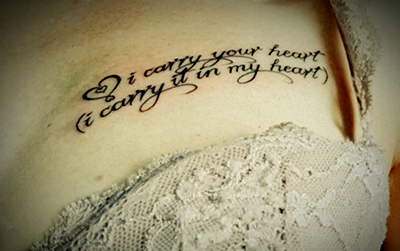 While Harri honoured Lowri with a cherub on her ankle, Lowri’s dad has a red heart and a ribbon with Lowri’s name on it above his heart. Her siblings were asked to wait til they were older. Lowri’s brother is working on his design, her sister has a butterfly with the words “…Right up to the moon and back… Lowri xx” on her side. The butterfly changes shape when she moves. 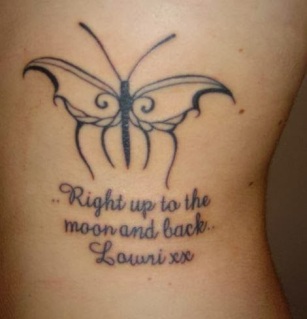 Chace’s parents, Keri and Ryan, both have tattoos. Ryan got his while Chace was still living; he watched his dad getting it and often used to touch it. Keri got hers after Chace died. They are similar ta moko (traditional Māori) designs, with symbolism representing protective elements of them as parents encompassing their child, water and wairua (soul/spirit).
The placement of Keri’s tattoo is also important to her “I know baby is with me but I struggle with not having him here to touch. The place is significant in that that’s the side I held baby on all the time and so it many ways it feels like the closest part of my body to his.”  She feels that touching it gives her strength and she often touches Ryan’s tattoo, as Chace used to, when he is feeling sad. 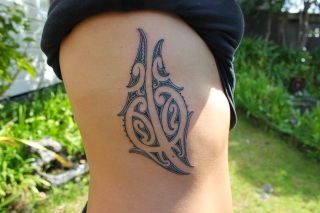 Helen’s father, mother and sister all got tattoos the day before her 21st birthday. Her mother Donna’s is a monarch butterfly with partially open wings resting on her shoulder, waiting to fly off again “I told Helen I would wear her like a cloak wrapped around my shoulders. Once I got the tat, there was a shift in my relationship with Helen – it felt like I had completed one more thing in her honour.”

Molly’s mother Tanya does not have a tattoo herself, but a friend asked her permission to have the date of Molly’s passing added to two others on the back of her neck that mark the loss of a child pre-birth and the loss of her mother.

Mia’s parents also feel the need to have a tattoo, but as their loss is so new, they are still thinking about a design they want to be perfect.

One parent who waited years to have the “right” tattoo done is Chris. She thought about it on Josh’s 5th and 10th angelversaries and on his 21st birthday, but nothing seemed right. She had always struggled with living in a different city to where he was buried and one day it came to her to tattoo the co-ordinates of his grave and his name on her wrist. She now feels connected to where his body is and often finds herself looking at her wrist and whispering his name. Having finally got her tattoo, in her words her “heart is warm.”

Just one parent who told me their story had regrets about their tattoo and that was due to it being poorly executed. They intend at some point to cover it up with one that represents all of their children.

I feel very honoured that these stories were shared with me, and comforted by the idea that the our children will not be forgotten while they live in our memories, on our skin and in our hearts.
Like Keri, I like the idea of my tattoo getting old and wrinkly with me. Maybe one day I will be lying at a funeral home and someone will look at my wrinkly old body with its wrinkly old tattoo and say “look, she has a story, she carried someone in her heart.”

A version of this story has also been published here on stuff.co.nz