It’s a funny thing about humans, we seem to think we can make a deal with life, with God, with cancer, with death. If this, then that. But damn cancer keeps not keeping its end of the bargain.

While Zoe was still on treatment in 2009, my Dad was diagnosed with prostate cancer. You know, the cancer that’s not supposed to actually kill you. Except his was aggressive and already metastasised when they found it, just six months after previous tests found nothing. So in the year after Zoe’s treatment finished, we did another round with cancer and this time we lost.
Dad told my Mum that he was ok with dying, as long as Zoe lived. That was his bargain and it did feel like we had somehow made an exchange – no matter how illogical, it felt like logic of the heart. So of course guilt came along with that bargain too. I got to keep my little girl and lose my Dad.

Except cancer did not keep its end of that bargain, it got my little girl too.

I have been reminded of the deals we do (or try to do) a few of times in recent weeks.
When I read about the family whose child finished treatment Neuroblastoma, only for the Dad to be diagnosed with terminal Melanoma (he is now on palliative care).
When I hear about the conflicted feelings of someone who has no options left but to help their child pass from this world as peacefully as possible while trying to support another family member who does have treatment options for their cancer.
When I hear of another relapse.
When I read about Courtney and the love of her life asked to make choices between quality and quantity, but choosing hope and laughter too.
Not only does cancer not keep its end of the bargain, sometimes the bargains are about hard choices, not survival.

In many ways it would easy to be angry about the deals we lose and cancer wins. Why me? Why didn’t my daughter get to win? But that way cancer would get to eat up my life too.
So instead, I like to stay involved in the childhood cancer community. To see and hear the stories of our survivors. For every one I meet, hear of, see enjoying the life they won back from cancer, I think you’re losing cancer, we’re winning. Take that cancer.
And you don’t get to destroy the rest of my life either. Yes profound grief is one part of my story and always will be, but it’s not the only part. I choose what Zoe would have wanted. I choose joy, I choose hope.
You lose, cancer. 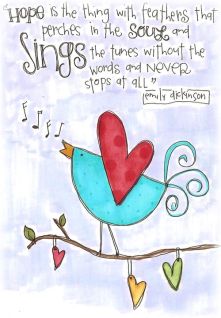 6 thoughts on “The deal with cancer”