The first feijoa just fell off our tree. When Zoe was two, the autumn before we moved to this house and it was empty, I would bring her here to eat the feijoas in the sun on the front steps. Feijoa harvesting (and figuring out what to do with all the feijoas) has been an autumn ritual since then. we created many feijoa cakes, feijoa muffins, feijoa, ginger and apple crumbles and feijoa chutney together. The year she was having chemo I even noted in this blog post that she was living on feijoas and hot chocolate.
In a year of firsts without her, some catch you by surprise. This one is hard too. 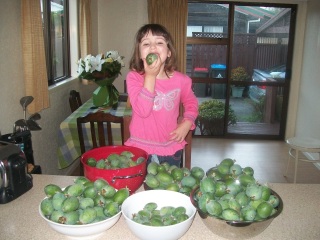 That was a couple of days harvest in April 2011. Here’s the link to the recipe for the chutney we made last year. I chose it so we didn’t have to peel all the feijoas.