Dr Harry, Zoe’s hero, stood at the top of the steps as we arrived. He looked just like he did on TV. Blue shirt, cream pants and a cheesecutter hat.

“Hello” he said. “I can see a little girl. And she’s wearing a cap, just like Dr Harry. And I bet her name is Zoe.”

As Zoe walked towards him he crouched down and spoke to her for a minute, asking questions to which the replies were mostly shy nods. When he asked for a hug she threw herself into his arms.
Then he stood up, she put her hand in his and they walked together into the house, just like something off TV.

Six sleeps earlier, Zoe had been complaining that we were going to miss her day care trip to
MOTAT if we went to Sydney. But that all changed when the Make A Wish Foundation visited to reveal that they had arranged the trip so that she could meet Dr Harry, the TV vet whose calm kennel side manner had been the focus of her play and energy when she had been struggling to come terms with her treatment and social isolation.

I’m not sure she believed them when they first told her, but slowly her grin got bigger and as she got more excited she brought out all her vet paraphernalia and toy dogs to show them.From there it was a countdown of sleeps until we could meet Dr Harry.

The Make A Wish Foundation made sure we were well looked after. Major sponsor Air New Zealand provided passes to the Koru Lounge, the flight attendants showered Zoe with attention and sent us on our way with a huge bag of Air New Zealand lollies (Mummy avoided sugar overdose by decreeing they were for sharing at daycare). We had a lovely hotel room near Central Station and some time to explore the city.

Make A Wish had also arranged tickets to Sydney Aquarium (fantastic) and a special behind-the-scenes tour of Taronga Zoo, where Zoe got to pat a snake, feed a Kangaroo and hold a Quoka and a Banded Tail Possum.

On the big day, after their initial chat, Dr Harry explained to Zoe they were making a TV programme (a Christmas special for Better Homes & Gardens), introduced her to everyone on set and told her to watch on the monitor to see if he did anything wrong. “But he didn’t Mummy” she says. During their lunch break he chatted to Zoe some more and with the dog trainer, who had four beautifully trained dogs on set, showed Zoe how to get the dogs to do a few tricks. Together Zoe and Dr Harry posed for lots of photos. 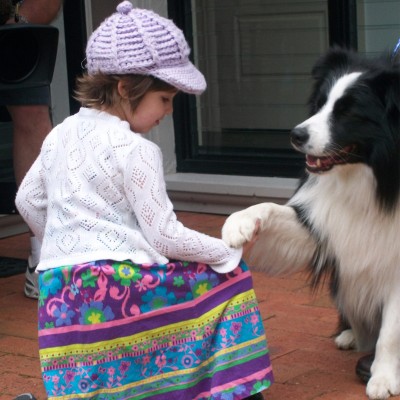 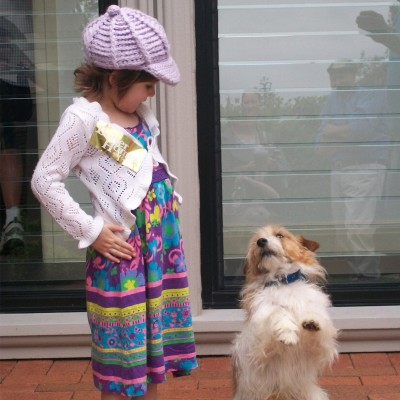 While they filmed their next scene (dogs stealing food off plates and Dr Harry giving tips on how to stop them) Zoe led an extremely patient border collie around the garden for an hour or so. “A labrador in a border collie’s body” said the trainer.

When it was time to leave, Dr Harry gave us a huge hug and came out to wave us goodbye, having granted a little girl her cherished wish.

Earlier, when the reporter from the daily telegraph had asked him how he felt about doing this for a little girl who held him up as a hero, he said, “Helping animals is one thing, but helping another person, well that’s something special. There are 24 hours in a day, 365 days in a year, we all seem to be so busy, and maybe we shouldn’t be.”

He also said that as he went along he realised his aim was to teach children love, compassion and responsibility for animals and that he believed this would translate into their attitude to their fellow man.

I don’t believe that Zoe could have a better person for her hero. Thank you Dr Harry.

And thanks to the Make a Wish Foundation including Vicki, Laura, Danielle, Anthea and Isabelle, Air New Zealand, all the folk at Better Homes and Gardens.

2 thoughts on “When Zoe met Harry”