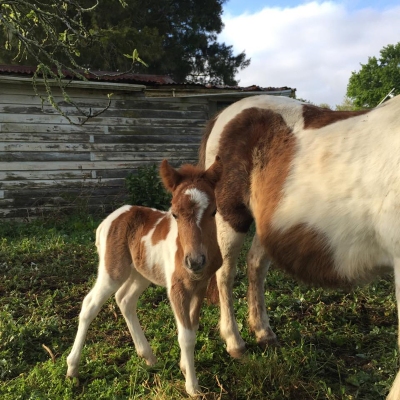 This photo popped up in my messages yesterday. Is there anything more lovely than a long legged foal? Perhaps only the reason it was sent to me. END_OF_DOCUMENT_TOKEN_TO_BE_REPLACED 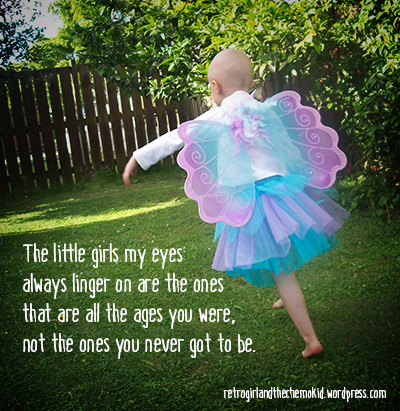 Three long years since you left us baby girl. You would now be entering tweenhood, but I find that so hard to imagine. The little girls my eyes always linger on are the ones that are all the ages you were, not the ones you never got to be. The toddlers wearing gumboots and tutus, pre-schoolers wearing glittery star t-shirts and choosing buns covered in sprinkles at the bakery, gaggles of giggling six year olds.

Some days, when something jogs a forgotten memory, or a photo unexpectedly brings a rush of emotion and I can recall the exact sound, smell, touch of you in that moment, I feel so close I could almost touch you. Other days I feel I am drifting further from you, despite hoarding memories, photographs and all your possessions. END_OF_DOCUMENT_TOKEN_TO_BE_REPLACED

It still haunts me to know that being bullied was a feature of the last few months of my daughter’s life, that in the beginning it wasn’t handled very well and that I failed her in this. 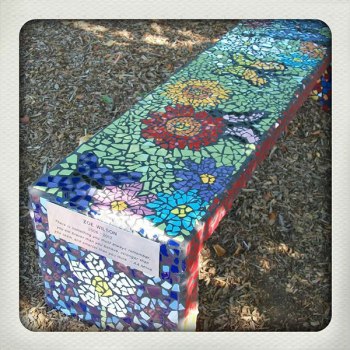 Early in her second year at school, around the time she turned 6, Zoe told me that some older girls were seeking her out every day at lunchtime to tease her, particularly about the way she spoke. Zoe had some speech issues relating to nerve damage either from her cancer or the radiation treatment. She had undergone surgery to her palette before the school year started and along with speech therapy, this was greatly improving the situation, but it was enough to single her out as a victim in the eyes of these girls (I want to say bullies, but that label seems to make them less human than they really are).

I took her in to school early one morning to catch her teacher before others started arriving and explained to the teacher what had been happening. Her teacher’s first response was “Well, I hate to tell you Zoe, but some people just aren’t very nice.” She went on to say that the next time it happened, Zoe should find the teacher on duty and point out who the girls were. While I was a little shocked at the comment, I felt there was a plan of action. And as a busy working solo mum, I didn’t want to rock the boat and be “one of those” parents. I assumed the school had it’s way of dealing with these things.

END_OF_DOCUMENT_TOKEN_TO_BE_REPLACED 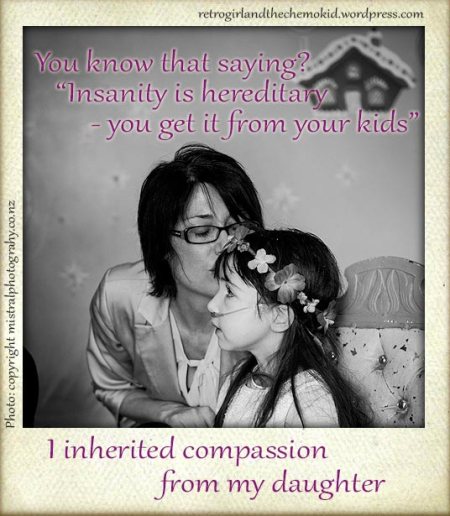 You know that saying – “Insanity is hereditary, you get if from your kids”?
Well, I think I inherited compassion from my daughter.

Until recently it was widely believed (in Western cultures anyway) that babies were born innately selfish, that it was our moral duty as parents to turn them from self obsessed little savages into beings fit for human society, through training them with reward and punishment. It seemed to make sense – after all, newborns are famously demanding in getting their own needs met no matter how exhausted their parents. END_OF_DOCUMENT_TOKEN_TO_BE_REPLACED

Many grieving parents say that it’s often not the specials days themselves – birthdays, anniversaries, Mothers Day, Christmas – that are hard, it’s the days leading up to them and the anticipation of them. I’d had a rough few days. I couldn’t concentrate and just wanted all the swirling thoughts in my head to go away. I was having trouble keeping the momentum for The Angel Zoe Kindness Project going when I just wanted to hide away in my bed instead and not speak to anyone. For the first time I felt I was not coping and started considering grief counselling. END_OF_DOCUMENT_TOKEN_TO_BE_REPLACED

I’ve been asking myself the question this week – “When is something I do part of The Angel Zoe Kindness Project, and when is it just something anyone with any sense of compassion and humanity would do?”