I’m sharing this post from last year to invite you all to eat ice-cream for breakfast on the 18th February.
I’m planning to, come back and tell me if you do too! You can also use the hashtags #icecreamforbreakfast and #kidsgetcancer too on social media networks.

There will be people around the world eating ice-cream for breakfast on 18th February. And despite being in two minds about cancer awareness campaigns, I’m going to be one of them. Here’s why. 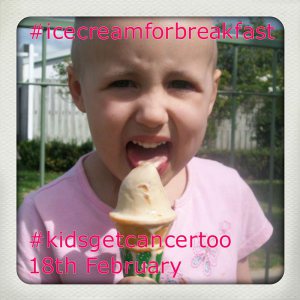 Generally I prefer charity activities that raise money for their causes over “awareness” campaigns that seem to do little other than make people feel good about participating.

I am planning on supporting Eat Ice-cream for Breakfast Day though. It doesn’t raise money. It doesn’t have an ice-cream company as a corporate sponsor. Yes, it is an awareness campaign for childhood cancer, motivated by remembering a little girl called Malia but it’s asking something a little bit different from you too.